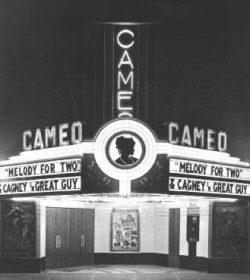 Entertainment and leisure activities are important elements for any community. They provide recreation and relationship building opportunities for locals and in the case of historic theaters like the Cameo, they can even be a draw for tourists.

For much of its history, Newberg has been a small town, but its need for entertainment has been significant. Through the years there have been at least five movie theaters in the quiet community. Today, two of them remain.

The Cameo is an iconic feature of Newberg’s historic downtown. The art-deco style theater was built in 1937 and is still owned by the Francis family who have operated it since its opening. A visit to the Cameo today is quite similar to what patrons experienced in the 1930s as the building retains much of its historic character. The single screen theater features some of the original 1930s seats and the front facade and marquee have been updated and maintained with historic preservation in mind. One distinct difference though is the audience that the Cameo serves. For years, the Cameo was considered an adult theater and was only open to patrons who were 16 years of age or older. Now the theater is family friendly and often shows children’s movies.

The single screen at the Cameo shows current films and they offer a full snack bar. In addition to trailers for upcoming movies, historic videos of Newberg and vintage ads for the concession stand are played before each film. We’re excited to add the Cameo to our Half Century Business Club and hope that next time you plan to go to a movie, you’ll consider visiting the charming historic theater.