A Home for Heritage

Fundraising has been challenging but our effort paid off on Monday, Feb. 11 when the West Linn City Council voted unanimously to support the renovation by dedicating $1.2 million in General Obligation Bond funds to the project.  The room was packed as supporters spoke to the Council about funding the project.  Thanks to WFL , Willamette Falls Heritage Foundation,  Maddox Woods , West Linn Historical Society , Confederated  Tribes of Grand Ronde and other supporters for your resounding testimony.

We have also received financial support from Clackamas Co. Tourism  & Cultural Affairs, the Jackson Foundation, and the Oregon Community Foundation.  We look forward to approaching more funders as the building renovation takes shape.  Those funders will be asked to consider supporting programming, galleries, exhibits  and public meeting space in the building.  Are you interested in being a funder?  Do you have a connection to a foundation?  Let us know!  Email us at info@wfheritage.org.

A big part of the hurdle we had to cross in getting funding support from the City   was parking at the Historic City Hall site.  All parking around the building is now leased by the Willamette Falls Paper Company.  But thanks to the community pride and sense of heritage of Ken Peterson the owner of the mill;  and the longstanding relationship of Mill President Brian Konen with the community of West Linn an agreement has been reached.  We are now putting the final details into a contract.  But the Heritage Center will not only have parking, we are looking forward to an exhibit on the history of papermaking at the falls, and in the future, tours of the Willamette Falls Paper Mill.  Thank you Willamette Falls Paper Company! 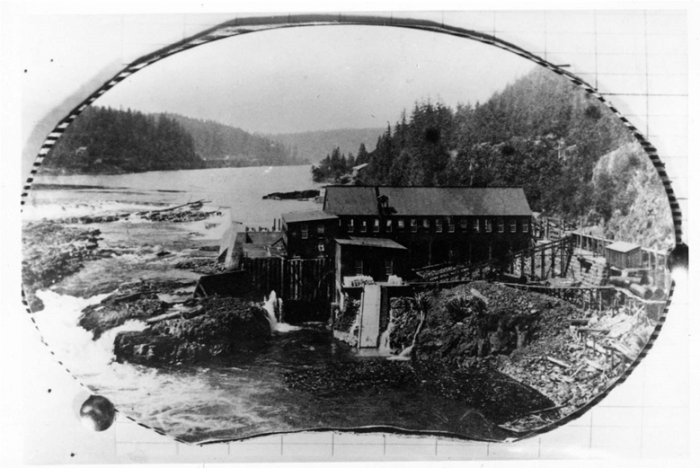 So, what’s next for the  Heritage Center building?  After the city signs the Parking Agreement with the mill, the permitting gets under way with the City’s land use approval  for the new use of the building as a Heritage Center.  At the same time, we will be submitting paperwork to the State Historic Preservation Organization to seek listing  the building on the National Register of Historic Buildings.  This opens up more avenues of funding for the building.   While funding protects the original historic appearance of the exterior façade, it still  allows us to bring the interior of the building up to safety and other code requirements   and allows for some innovative design concepts for the inside. 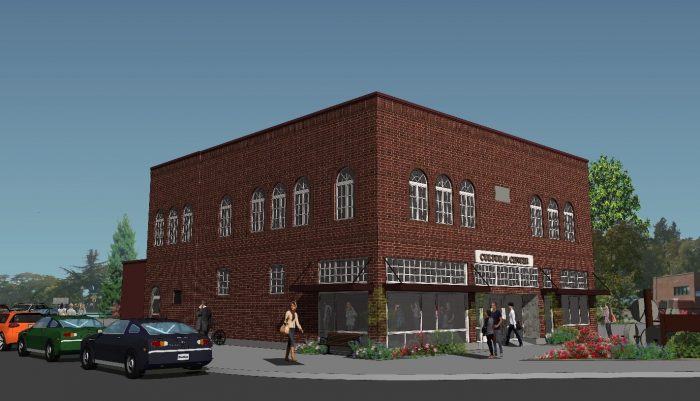 Want to help?  There will be lots to do on the inside and the outside once the renovation is complete.  There is a donor wall just begging for the names of donors who help fund interpretive exhibits, facility improvements, displays, gallery space and more.  We will need basics like carpet, paint, landscape, technology etc.  Go to our website at www.wflha.org and click on the donate button or email us at  info@wfheritage.org we will get you on our volunteer/donor list.  And there will be some exciting announcements about fundraisers and friend raisers coming soon.   Stay tuned.

UNLOCK THE LOCKS – AN UPDATE

Some Background: WFL is dedicated to supporting the repair and reopening of the historic Willamette Falls Navigational Canal & Locks located on the West Linn side of the Falls.  The system opened in 1873 and provided a vital shortcut around the falls.  It  was the first canal and locks in the Pacific Northwest.

In 1915 the United States purchased Willamette Falls Navigational Canal and Locks and turned their operation over to the U.S. Army Corps of Engineers.  The Locks were key to regional commerce and were named a “National Treasure” in 2012 by the National Trust for Historic Preservation. But in 2011 they were closed  by the U.S. Army Corps of Engineers.

A Proposal to Reopen the Locks: But a strong movement exists to reopen the locks.  Under the Chairmanship of Mayor Russ Axelrod (West Linn), who is also on the WFL  Board of Directors, the Willamette Locks Commission delivered a proposal to repair and reopen the Locks to the 2020 Legislature.  Their work over the past year was called for through SB 256 in the 2017 Legislature and a budget note from the 2019 Legislature, directing the Commission to address the following 5 points:

1.Identify the new owner/operator to become the transferee from the US Army Corps of Engineers:

White Paper Response: The new owner/operator would be the Willamette Locks Authority, a public corporation to be established by enactment of HB 4150-A.  The Authority would take ownership through a transfer from the US Army Corps of Engineers.  The Authority would be an independent organization with a Board of Directors appointed by the Governor and with its own staff and ability to contract for needed goods and services.  The Authority would be responsible for the repair of the Locks and their operation and maintenance after repair.

2.Define actions needed to transfer ownership from the Corps:

White Paper Response: The US Army Corps  has completed a Disposition Study with an integrated environmental document calling for transfer to a non-federal entity due to lack of federally significant economic benefit. The direction on the course of action to be undertaken by the Corps has been approved by the Assistant Secretary of the Army for Civil Works, the highest civilian position in the Department of Defense. The Final Disposition Study included an integrated Final Environmental Assessment (EA) and Finding of No Significant Impact (FONSI).

However, in order for the Corps of Engineers to transfer ownership to the newly created Willamette Locks Authority, Congress would need to deauthorize the Locks as a federal facility and include directions to carry out the transfer in the Water Resources Development Act, adopted every two years (2020 is the next opportunity).

3.Describe the contribution toward repair that the Corps is willing to fund:

White Paper Response: Before executing a transfer, the Corps is obligated to implement seismic retrofit repairs to the upper gates for an estimated cost of $2.7 million.  These gates are an integral element of the Willamette Falls Dam, owned by PGE, designed to direct water flow through their hydroelectric power generation turbines.  If the gates were to fail in a major seismic event, it would cascade into causing all the gates to fail creating a bypass of the Falls.  Such a bypass would undermine the Corps’ investment in salmon and steelhead recovery upstream.  Seismically retrofitting the other gates would be among the various repairs and upgrades the new Authority would be responsible for. Funding for the Corps to implement their seismic repairs would require Congressional appropriation for design and engineering (already done in 2019) and construction (likely in 2021).

4.Define the cost to implement repairs, the funding request from the Oregon Legislature and the availability of other funding sources:

White Paper Response: The Willamette Falls Locks Commission voted to recommend $14,043,375 in lottery bonding for capital repairs and restoration of the Locks to a safe and readily operable condition. The recommendation was based on strong stakeholder support and projected economic development return on investment from the reopening of the Locks.

The scope of work includes the repair of the fundamental life/safety defects, fire protection and safety improvements, repair of operational mechanical and electrical equipment, lighting, seismic repairs on gates 1-5, upgraded hydraulic power units and modernized control systems. The work is assumed to be scheduled across two years (2021 and 2022), after the lottery bonds are issued, incorporating two years of escalation.

5.Develop a business plan for on-going operations and maintenance:

The first 3-5 years of the Authority would be paid for through contributions from interested jurisdictions and organizations and consist of establishing the organization, staffing up and contracting for repairs.  Upon repair, the Authority would move into an operations phase paid for with user fees.  It is expected that use of the Locks would focus on three distinct markets:

Two Bills Before the Legislature:

What Happened in the 2020 Session?

The 2020 Legislature convened in February with a planned 6-week session.  In order to adopt HB 4150-A, the process started with a hearing and a Do-Pass recommendation from the Joint House/Senate Transportation Committee.  Following that, the full House of Representatives held three readings and unanimously approved the bill.  Then the process shifted to the Senate which held one reading and was poised to pass the bill when the Legislature was forced to adjourn due to lack of a quorum.  Meanwhile the Joint Ways and Means Committee held a hearing on HB 5202-A with a Do-Pass recommendation which would have provided one-half the needed funds for repair and upgrade.  Unfortunately, the bill didn’t make it to the House or Senate floor before they adjourned.

So, despite the valiant effort to pass the bills and a very high level of support in the Capitol, the effort was not successful.  The process will need to start over in the 2021 Legislative session or, perhaps a Special Session of the Legislature.  Stay tuned.

HOW CAN YOU HELP?

Be sure to thank your Legislator, the Speaker of the House, the Senate President and the Governor for their effort. 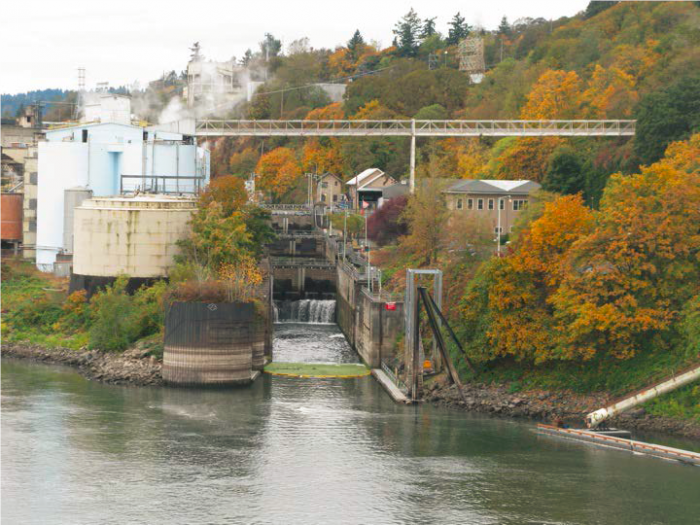 EVENTS TO LOOK FORWARD TO

Gathering Lamprey at the  Falls 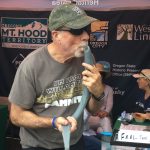 Join us as Kamiah Koch a Grand Ronde Tribal member and the social media Journalist for Some Signals, the Grand Ronde Free Press shares her up close and personal story gathering lamprey for the first time at  Willamette Falls with her uncle.

Finding Your Roots:  A Free Genealogy Forum
Learn how to pull together the missing pieces of your family tree. It will be facilitated by genealogy whiz kid Charlotte Lehan and featuring genealogy experts and resources.

Honoring the businesses that have blazed a trail in the Heritage area for 50 years or more.  A map on the homepage of the WFL website can confirm if a business is within the Willamette Falls & Landings Heritage Area. (https://www.wfheritage.org/) go to Explore. The Heritage Area is 56 river miles that stretches from Philip Foster Farms near Estacada to Mission Bottom just outside of Salem.

While a list has been compiled, if your business or a business you know of fits the above criteria, please email info@wfheritage.org or call the WFL at 503-419-6340. The award ceremony will be a program and reception next Spring, 2021 in Canby at Cutsforth’s Market Town Hall Room in Canby. Keynote speakers will be Chrissy Curran, Deputy State Historic Preservation Officer and Samara Phelps, Executive Director Clackamas County Tourism & Cultural Affairs. 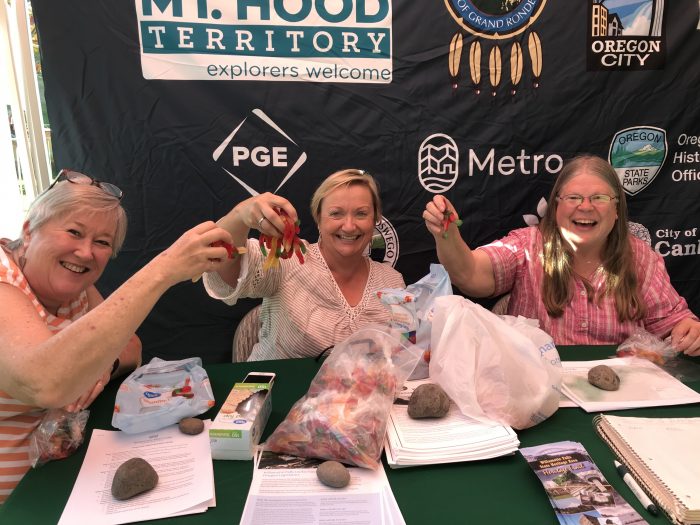